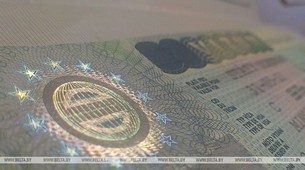 MINSK, 14 April (BelTA) – Belarus has completed the ratification of the visa facilitation agreement and the agreement on readmission of individuals staying without an authorization with the European Union. The corresponding laws dated 9 April were officially published on the National Legal Internet Portal, which means that they were signed by the Belarusian head of state, BelTA reports.

On 2 April the documents were passed by the House of Representatives and approved by the Council of the Republic of the National Assembly of Belarus.

Deputy Minister of Foreign Affairs Oleg Kravchenko presented the visa facilitation agreement in the Oval Hall. He noted that the agreement seeks to ease the visa issuance procedure as much as possible.

The main provisions of the agreement include reducing the cost of a Schengen visa for Belarusians to €35. Many groups of citizens will be able to apply for visas without paying the fee depending on the purpose of the visit and will be able to get multiple-entry visas with longer periods of validity using a simplified procedure. For example, to get a five-year Schengen visa, an entrepreneur will only have to provide a letter from the receiving party.

Oleg Kravchenko pointed out that the agreement applies only to short-term visas and does not regulate the procedure of issuing a Schengen visa for study or work.

Belarus and the EU signed the visa facilitation and readmission agreements in Brussels on 8 January. The parties believe that this will facilitate human contacts and the development of international ties, including in tourism and strengthen trust and mutual understanding between the nations.

The agreement provides for mutual facilitation of visa procedures for a broad spectrum of citizens and for reducing visa fees. Citizens will be able to apply for visas to embassies of European nations and to visa centers. The price for a Schengen visa for Belarusians will drop to €35 while the decision to issue a visa or not will be made within ten days (30 days if additional background checks are required).

The cost of Belarusian visas for European Union citizens will drop to €35 as well. Apart from that, the list of justifications for issuing free visas for non-commercial purposes will be expanded. The duration of stay of foreigners in Belarus will be doubled from 90 days per year to 180 days.

Once the readmission agreement comes into force, Belarus and the European Union will have to readmit (take back) their own citizens, third-country citizens, and stateless persons, who do not meet or no longer meet the requirements to legally stay in each other's territory. Belarus will be granted a two-year transition period with regard to the readmission of third-country citizens. The joint declaration attached to the readmission agreement obliges the European Union to provide technical and financial support to Belarus in this area.

The documents are to be endorsed by the European Parliament. They will come into force on the first day of the second month after the parties have notified each other about the completion of the ratification procedures. The visa facilitation agreement is expected to come into effect in June 2020.