Ryanair boss against long-term ban on use of Belarusian airspace 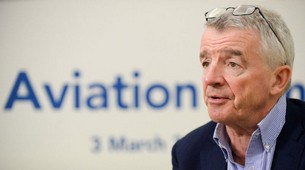 MINSK, 15 June (BelTA) - Ryanair does not support a long-term ban on the use of Belarusian airspace, Ryanair CEO Michael O'Leary told British MPs, Reuters has learned.

Speaking in the UK's Transport Select Committee on 15 June, Michael O'Leary said it is “not in our long-term interests as an industry or in our passengers' best interests” for those policies to continue permanently.

The aviation industry depended in the long term on unrestricted access to all airspace, something, he said, should be restored. “The freedom to overfly states is something that we have perhaps taken for granted for the last 70-80 years,” Michael O'Leary said. “We must restore it as quickly as possible."

Earlier, Wizz Air CEO Joszef Varadi criticized European governments for banning flights over Belarus in response to the forced landing of a passenger plane saying that such moves make aviation “a toy of politics”.

A Ryanair plane en route from Athens to Vilnius landed at Minsk airport on 23 May after a bomb alert. After the landing, the information about the bomb was not confirmed.

On 2 June the European Aviation Safety Agency (EASA) called on EU states to stop flying in Belarusian airspace due to the incident with the Irish airline Ryanair. It issued Safety Directive calling on the National Competent Authorities in EASA member states to instruct aircraft operators with their principal place of business in their territories that conducting operations in Belarus airspace is no longer allowed.

On 4 June the International Air Transport Association (IATA) condemned EASA's pressure on carriers to avoid Belarusian airspace, accusing it of overstepping its role and politicizing air safety. IATA calls for independent investigation into the Ryanair incident.